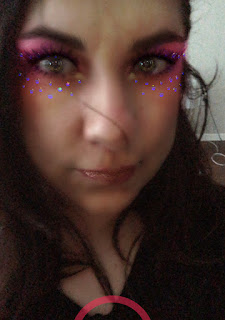 That’s a picture of me with one of the TikTok filters called “exotic makeup”. I was posting some TikTok videos that were responses to people talking about similar experiences to mine in life, then I deleted my account. The filters are pretty exotic on that app, but I never used one in an actual video. It’s good to see yourself on video to practice how well you come across, but TikTok gets addictive.

For summer break, I’m allowed some extra weekdays with Evita aside from my normal weekends. I picked most of them right now in early June. She and I had a cooking day on Thursday. I taught her how to make bread from scratch. She didn’t want to get it under her nails and seemed a little grossed out at the dough, but the end result was good. Everything else, she enjoyed making. She went back to her dad’s Thursday, and I see her again on Tuesday. I worked yesterday, and honestly I really do get scatterbrained when I do audits all around the Houston area. I do so much better when I leave town. I don’t know why this is, but it’s probably because in town I tend to do errands or go home in between. I can’t do that  out of town, but with so many days with Evita plus so much to do for my mom (she’s also not driving right now), it’s not a good idea to venture out.

I mentioned before that beverage audits have a base pay and then an incentive of 20 cents per display. For the past few “waves” of beverage audits, beer and wine didn’t count but this time they do. This adds more incentive pay, which is good. But I was doing Kroger stores. The ones I did had insane amounts of beverage displays and also entire wine and beer sections which had their own mini endcaps and everything. I did two Kroger’s and a handful of dollar general and family dollar stores.

I’m really tired lately. Between working, still being kind of new in this apartment, a lot more days with my daughter and a lot of things to do for my mom, my sleep has been off too. I got home yesterday at about 7:00 and just fell asleep immediately. The problem with that is that I got up at 1:00 am, knowing I was not going back to sleep.

The exhaustion hit me like a ton of bricks yesterday  and I parked under some trees at a Walmart and tried to close my eyes, but it was almost 90 degrees. I can’t just chill in my car anymore like I could from like October- March.